Walking around the Tretakayov State Gallery I found Russia’s middle class. There they were sipping coffee among the tourists in the café, and tugging their young children past the 15th century icons. These people – the forward looking element of the Russian electorate –  have been thrust to the centre stage stage of this country’s politics. Whether or not the opponents of president-elect Vladimir Putin can mobilise widespread anger about the rigged Duma elections (December 2011), and Putin’s recent landslide (March 2012), and force a permanent change to the political landscape remains to be seen. There is no Russian precedent for a lasting transition of power from an elite to the majority. Since March Putin has fast tracked reforms on the registration of political parties, lowering the membership threshold from 40,000 to 500. In theory this is a reform which opens up Russian politics (a core demand of the protesters), in practice it may disaggregate his opponents into a noisy throng of small, and competing, political parties.

The conflict between Russia’s elite and her people is a constant theme of the paintings hanging in the Tretyakov. Russia’s religious superstitions and schisms, the brutal attempts at modernisation, the enduring hardship of her poor, the brilliance and trouble of her thinkers, their changing fashions, the beauty of her never ending landscapes, the struggle to resist invasion – here is Russia’s story, told without sentiment, without flinching. Kuinji (how about these silver birch), Kramskoy, Marovsky, Repin, Surikov (the assassination of the strelsi), Shishkin (Russia’s forests), Levitan, Vereshchagin. Names I had not heard of before, but whose talents explain the lives of its people. This illumination is wonderful in a city where tight political control and the hard struggle of ordinary people create a feeling of claustrophobia. Moscow is a city that pummels man, but here is a reminder of man’s resilience and our yearning for truth and justice.

There are several portraits of Tolstoy. The humanity and helplessness of his characters – men like Kostya Dmitrievich Levin (Anna Karenina) and Count Pierre Bezukhov (War and Peace) – and the urban and rural landscapes they lived in, are brought to life in these pictures. No wonder the Russians hold him so close to their hearts, for his historical sense and his restlessness, and the terrible realism of his stories.

What about this (see below) for a heart-stopping image? It is by Vasily Vershchagin and it is called ‘The Vanquished, The Officer of the Dead’ (1878/9). Double click on it to see some of its detail: 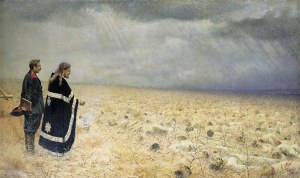 Note the surviving men are both wearing the uniforms of two of Russia’s enduring power structures: the army and the church, while the dead soldiers are naked. Can you hear the beat of the incense dispenser swinging gently? The air is heavy, rain is on its way.

One thought on “Russia’s middle class + a marvellous painting”