Walking past the entrance to the European Central Bank I could see the tension in the faces of the chauffeurs and the bodyguards standing by the security gate smoking cigarettes. Towering above them is the money headquarters for a continent of over 300 million people, and things are in bad way.

Around the corner in Willy Brandt Platz, Occupy has pitched marquees and tents hard up against a fringe of trees and ornamental shrubbery. The coming and going of the protestors, and the large contingent of romany families who have added their tents to the occupation, has rubbed out the grass and worn desire paths connecting Occupy’s inhabitants with the city whose wealth and power they seeks to reframe. ‘POWER to the PEOPLE’ reads one sign, ‘EUROPEAN SOLIDARITY MOVEMENT’ says another. There is graffiti on the nearby € sculpture, its blue plastic sheen and hovering yellow stars familiar after a decade of news broadcasts recording the single currency’s rise and its long and nasty fall. Leaning against the trunk of a plain tree a whiteboard carries a diagram which suggests alternative ways of doing things. A young man emerges from a tent, unlocks a bike from a park bench and sets off in the direction of the opera house. In one hand he controls a heavy dog at the end of a long lead; the dog bounds away across the tram lines pulling the man behind him.

The doors to the opera house are locked, which is a shame as I wanted to check it out. I am writing a novel set in Frankfurt over one week-end and my protagonists spend Saturday night watching Wagner’s Parsifal. A few hundred metres to the south moored cruise ships are taking on fresh supplies while their passengers tour the cathedral and the Jeff Koons exhibition at the Schirn Kunsthalle. 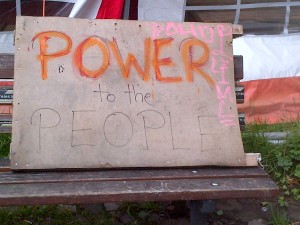 I’d say Frankfurt is the colour of money and not just because it hosts the ECB (and its organ grinder, the Bundesbank). This a city at the heart of a continent, it has a great river running through it, a cavernous railway terminal – Frankfurt Main Hbf has 21 platforms and an infinite choice of bars, cuisines and book shops. Frankfurt’s airport is Germany’s largest, its floors are covered in acres of grey marble. Outside the city stretches deep green forest full of mushrooms and wild boar. This is a city which cannot help feeling comfortable.

But wealth makes for slow days in the rain; the morning passes in humid rainfall. On foot, I have the beautiful clean pavements to myself. Large black cars hiss past on Mainzer Landstrasse, or pause while a security guard raises a boom and they can tip forward down a ramp into an underground car park. Coffee shop after coffee shop; delicious looking sandwiches and pastries. A bank’s reflection pool has been drained for repairs; a couple of black men are hosing it down. Behind them a lump of flecked brown marble curls like an enormous petal.

After lunch the grey sky dries and a breeze comes off the river. I sit on the southern bank of the Main eating chips and staring across the river into the small thicket of high towers. Commerzbank’s headquarters, which is Germany’s second largest and badly damaged by the financial crisis, used to be  Europe’s tallest building (thanks to a theatrically long and thick communications mast), but now that boast is made by the Shard in London. Cyclists pass by with a precautionary peal of a bicycle bell. The sound of children screaming grows louder as they gather on the nearby trampolines and the rides, and queue to have their faces painted.

I sit by the river thinking how dull everything is. Everyone here is busy performing a prescribed role, they are hidden from view in the silver towers of Deutsche Bank and Commerz Bank and Deka and Deutschebahn, and in the concrete and granite foothills the lawyers and private bankers who help keep everything functioning smoothly and to profit. There aren’t many loose ends; at least there aren’t many visible in the city centre. Even the taxi drivers drive Mercedes, and when they’re not driving these heavy, over-powered limousines up and down Frankfurt’s wide boulevards they congregate outside spotless kiosks to sip expresso and compare their pension plans. All the taxis in Frankfurt are painted a pale shade of beige – a sort of crème caramel. I’ve never seen it anywhere else. It’s a nice colour and it’s sophisticated and it’s very Frankfurt. 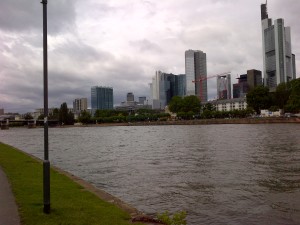 In Athens Merkel’s Germany is compared with the Nazi regime. Strident Athenian voices claim that it is their generation’s turn to resist Greece’s occupation. But Merkel’s Germans aren’t colonisers; they are reluctant leaders of Europe. They are doing their best to sort out a crisis whose unravelling has yet to really hurt them, but which has the potential to engulf them in catastrophe. Democracies struggle to react to existential crisis quickly and tidily; Germany is no different and Merkel has even less freedom of movement than many might think: Germany’s post war constitution invests ultimate sovereignty in Das Bundesverfassungsgericht, the country’s supreme court which in any final reckoning will act to protect Germany’s post WWII constitution – not the Eurozone. Smug and intransigent the Germans might sometimes seem to be but they have much to be smug about; Frankfurt’s silver towers and boulevards being a good example. Germany’s society is not perfect but it works pretty well and it seems to suit the Germans – and it’s all at risk.

2 thoughts on “Notes on Frankfurt”