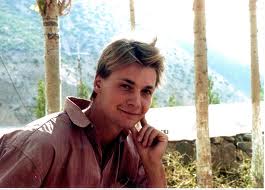 10 years ago Roddy Scott, a freelance journalist, was shot dead by a Russian soldier in Ingushetia. He was travelling with a group of Chechen separatists, which he was filming for a documentary. The group had crossed over into Ingushetia from the Pankisi gorge, a journey on foot through mountainous country of very significant physical hardship. Once in Ingushetia the group was located and hunted down by Russian forces. In the village of Galashka the group found it was surrounded and had to fight its way out and up onto higher ground. During the skirmish a Russian helicopter was shot down. The fighting intensified, and several members of the group were killed, including Roddy.

Roddy was a dear friend of mine. Ten years on I miss him very much.

Roddy chose to devote himself to the causes he thought important, however difficult they were and whatever the danger this exposed him to. He was drawn to the stories of those who were persecuted and whom history had bashed about. On September 26th 2002 he died hungry and thirsty and exhausted. He was cornered. The image is distressing but I know Roddy would have considered it a good way to go, if go he must; I suspect his last few hard days spent among fighting men whose trust and respect he had earned, gave him great fulfilment.

People like Roddy haunt our complacency, their daring example illuminate for the rest of us what life can be used for, what is possible, what is important. Roddy had grit, he was a risk taker, he lived courageously. Remembering him makes me realise how inappropriately these challenging words are applied to the actions of today’s political and business leaders. It takes great skill and patience to climb the greasy pole, but it very rarely takes courage.

Roddy’s disruptive force, the quiet thud of his boots climbing over the mountain range towards danger is for me his enduring value. Of course, few would try to emulate the life he chose; war zones are unfriendly places, though they suit a young man best. And Roddy didn’t want to take the path we were all heading down: routine, marriages, the pram in the hall. He was usually absent; when we did see him it wasn’t long before he was planning his next trip.

Ten years on, we no longer have a 31 year old’s freedoms, and we have many more responsibilities. But we can listen to the thud of his boots, we can look for causes we might champion, we can each be as courageous as possible.

On September 22nd I and two others will be swimming in the Dart 10k, raising funds for the Roddy Scott Foundation, a charity set up by Roddy’s parents, Stina and Robin, and his brother Nick, to “provide money and support to communities which have been socially and economically disadvantaged as a result of civil disturbance, war or natural disaster.” Most of the RSF’s work is focused on expanding the existing schooling for socially deprivedchildren in the Pankisi gorge by providing English teaching, IT classes and nursery school facilities.

If you’d like to make a donation to the Roddy Scott Foundation please click here. Thank you.

Read Roddy’s obituaries in The Guardian and The Times.

2 thoughts on “Swimming for Roddy”