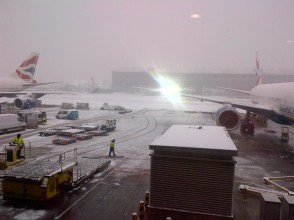 BA182 is the final British Airways flight out of JFK on Thursday night and six hours later the heavy snows falling over southern England oblige us to circle a couple of loops over Heathrow before we can land. One of the airport’s two runways has been closed and at last we descend into  cloud the colour of dirty cream. We land and taxi off the runway to wait while a parking space is found. The pilot comes on and off the intercom.

“Please bear with us, and be thankful that we are here and not somewhere else” he says; he is a heavy-sounding Scot.

The mood in the cabin is philosophical: it is Friday morning, England is in retreat from extreme weather, we are snug and helpless and sleep-deprived. The captain turns off the engines, snow falls outside and it is suddenly blissfully quiet. An hour or so passes in isolation.

The following master-minded by my brilliant wife while I sat at 30,000 feet over the Atlantic:

The taxi which had been booked to pick me up was bogged down in snow on the A303. A replacement is found: Kiri from Airport Connections, who greets me shyly outside Terminal 5. We shake hands, temporary collaborators against the falling snow. We load my luggage into the boot of Kiri’s Ford Galaxy and five minutes later we join the slow convoy heading west on the M4. Stop-start and grey slush until Reading when the rest of the traffic magically decides to turn-off and gentle Kiri, repetitive in his astonishment at this turn of events, puts his foot down and suddenly we are doing 70 passed the closed white fields and the woodcutter’s cottages and frozen trees of high Transylvania. Even the hard shoulder is mint-white and perfectly smooth.

At Chieveley Service Station my neighbour, voluntarily diverted – the rest of his day disrupted – is waiting for me in his Land Rover Defender. Kiri pulls the Galaxy up next to him and I wade through deep snow to transfer my luggage. Kiri, spared the A roads and worse, turns back towards London.

My neighbour and I set off on the final leg of my journey home. We have forty five minutes to go, across four wheel drive country south west towards Salisbury Plain. Right on time we drive carefully along the ice road into our village. A buzzard hunts overhead. The village is hard to reach, supplies are running low. There are my boys, building an igloo. 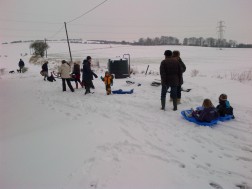 The next morning we wake to deep winter; our bedroom icy, the outside world black and white. Soon there is the orange of a fire in the sitting room and I fetch a broom to knock icicles off the edge of our thatch roof. Out on the terrace, a nut hatch insinuates itself upside down on the bird feeder. Then the military blue and scarlet of a gold finch.

After lunch, a village expedition onto the side of the Plain. Fifteen of us – perhaps one fifth of the population – walked out along the road and up onto the hill. Snow in deep drifts, the children being pulled along on sledges. Up on the top we ride fertiliser bags full of straw down the hill to smooth a run to the bottom and then take it in turns to sledge down in combinations, alone, flying along. At the bottom two people to guard a fence line. The sky the colour of mother of pearl. Fast down headfirst on a wooden sledge ‘made in West Germany’. Tom from number 24 shoots between the two stewards and avoiding a tree trunk lands in a ditch. His mum calls time out. He insists he is fine. His dad, who is from the north east, cheers him up with news that Newcastle has just gone one-nil up.

That takes the wind out of his sails. 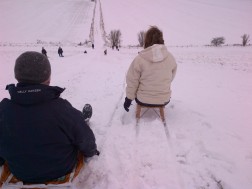 Far away in the next door field men are coursing and suddenly there is a brown hare making good speed up the steep hill, its ears back and after it a knackered-looking greyhound. Various border terriers belonging to our company tear off in pursuit.

“Not a chance” laughs one of their owners.

After two hours of climbing up and sledging back we pack up and head for home. The light is failing and the melancholy and the sense of coming in off the hill is wonderful. Days behind me lie the clean pavements and the freeways of California, the swimmers in the Pacific. Winter mornings in Manhattan; the short night above the Atlantic. Crazy life and work eclipsing the old ways and attachment to a piece of landscape but here I am in mine and firmly attached and how lucky and ridiculous.

Cold faces, legs stiff with walking uphill. We follow one another into the warm fug of someone’s house, entering by the back door past winter stables for a Shetland pony called Jamie Dancer and into the kitchen which smells of mulled wine and hot chocolate. Cups of both. Toasted tea cakes and crumpets. The pleasure of someone else’s sitting room, the smell of their coal fire piled high, their books on the shelves. Time passes in gossip. We have nothing in common except our geography. We have everything in common because we are neighbours and now we are friends. Should the world end quickly, this house-full might include my companions right at the close. Barricaded. Armed as well as we could. An enemy drawing closer. There’s a book there, I think, sitting by the coal fire watching the hillside ellipse into navy blue. 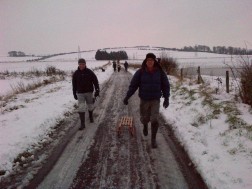 3 thoughts on “Notes on tobogganing”